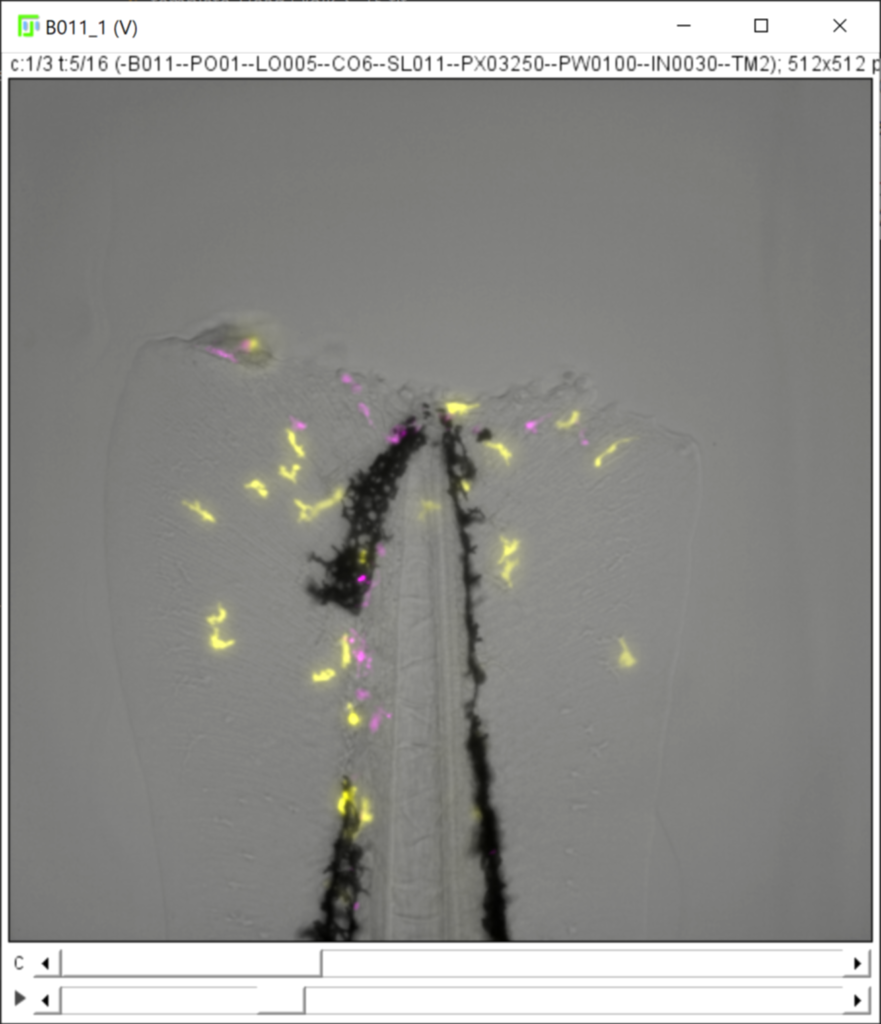 In Fiji, the ACQUIFER update site (available upon request) provides a set of “hyperstack” plugins for the rapid generation and processing of multi-dimensional image-stacks, for every well/subposition present in an Imaging Machine dataset (see the tutorial on YouTube).
The following plugins are listed under the menu ACQUIFER > Batch > Hyperstack (or ACQUIFER > Legacy > Batch > Hyperstack for IM03 datasets) :

To process individual image files in batch without generating a hyperstack, have a look at the dedicated “Batch-file” plugins.

The Make hyperstacks plugin allows the generation of multi-dimensional hyperstacks (time, channel and Z-slice slider) and/or Z-projections, for specific wells and sub-positions from an IM experiment directory.

Similarly, the Batch process hyperstack plugins provide a simple solution to execute a custom macro-code or script, for every generated hyperstacks or projection images.

All plugins are macro-recordable, to facilitate their integration in custom workflows.

The plugins rely on functionalities provided by our custom acquifer-core and acquifer-IJ java packages. Advanced users can take advantage of these packages in Fiji, to write custom scripts (see scripting examples).

Note about the pixel-size The pixel-size (calibration) will be automatically configured for the images generated by the plugins (see menu Image > Show Info...). However for the field Voxel size, the value along the Z-dimension does not actually correspond to the pixel-size along Z but to the spacing between successive slices. Therefore the indicated volume Depth is not exactly the indicated value but this value - 1 "voxel Z-size".

Like with other Batch plugins, the left part of the plugins interface let you select the wells and sub-positions for which a hyperstack or projection image should be generated.

If multiple sub-positions were imaged within a given well, the plugins generate a separate hyperstack (and/or projection image) for each sub-position, ex: B006_1, B006_2 for the 2 first positions within the well B006.

Using specific values or range for the Z-slices, channel and timepoints fields, you can restrict the content of the hyperstack/projection image to a fraction of the available images (e.g to visualize only the fluorescent channels, see Dimensions selection).

If these fields are left empty, the resulting hyperstack will contain all available images for this well/subposition.

In addition to the hyperstack, the plugins provide options to generate a projection image, using one of ImageJ projection methods.

Projections will be calculated if “Project stack”, “Show Projection” or “Save Projection” is ticked.

Don’t forget to tick the “Show projection” button to view the results of the projection. Leaving this box unticked can be used e.g. when the projection should only be saved (tick “Save Projection” exclusively), or for headless execution with the Batch process hyperstack (script) (tick “Project stack” exclusively).

However, displaying the hyperstack is not necessary to perform a projection, only the projection can be displayed.

If the hyperstack does not contain a Z-dimension, then the time dimension is projected, separately for each channel.

Only a fraction of the available slices can be used for the projection (Custom slice-range).
This can yield better results when the first and last slices of the original hyperstack tend to be out of focus. It also speeds up the computation of the projection.
The start/stop slices indicated in the GUI correspond to the slice indexes in the generated hyperstack, not the experimental slice index (SLxxx in the filename).
For instance, if the dimension selection was set to use Z-slices ranging from “experimental” indexes 10 to 15, and the projection was set to use a custom range start=1 and stop=3, the projection will be performed with slices of “experimental” Z-indexes 10 to 12 (i.e. the 3 first Z-slices of the generated stack).

You can customize the default settings used by the plugins to display the images, such as :

Note: the display saturation does not change the pixel values, only the display range, as in Image > Adjust > Brightness/Contrast.

See our example macros on GitHub or in Fiji under the menu Acquifer > Examples > Batch hyperstack > macro.

In ImageJ/Fiji, executing macro-commands requires displaying the images (tick Display hyperstack and/or Display Projection).
However, you can turn on headless mode after that in your custom macro.

A number of macro-commands do not work on virtual stacks (what we use to avoid saturating the computer memory). The macro should thus first duplicate the generated hyperstack before executing some commands. See this first example macro demonstrating how to duplicate the active image, process it and save it to the default directory as defined in the plugin interface.

– Process the active image or select the image to process

To avoid that, set the active image to either the stack or the projection image using selectImage(yourImageName) before executing some commands.

You can recover the name of the stack and projection images generated by the plugin at each iteration using getArgument() followed by Ext.splitArguments as demonstrated in this template macro.

To facilitate saving images in the custom macro-code, the GUI provides a field for a default directory.

If left empty, the default directory will point to : YourExperimentDirectory/macro_output.

The plugins automatically create this default directory on disk if not existing, and store the path to this directory in a string variable accessible in the macro-language using the command getDirectory(“default”).

Similarly you can recover the directory of the active image with getDirectory(“image”). This can be used to recover the current dataset directory.

However, make sure to call this command before generating new images within your macro, as the command would otherwise return the directory for this new image (which might be None if they are not yet saved).

Finally to recover the current image name, use the command getTitle(). The title is the name of the image window, not the filename (there is no filename for hyperstacks, since it is a collection of files not a single file).

Script files of any programming language supported by Fiji can be used, see the examples for the macro language and for jython on GitHub.

The only condition is that scripts should start with a fixed input convention, with 2 script parameters as following:

Displaying the images is in this case optional, the ImagePlus objects in memory for the hyperstack (stack) and projection (proj) are directly passed to the script.

This does not apply for ImageJ macro files, for which images will be automatically displayed. In this case the stack and proj variable will resolve to the windows title, such that you can use the commands selectImage(stack) and selectImage(proj).

Note: If no projection was generated, the proj variable will be null.